Continuing the series of coverage of Horse Racing from Del Mar, California, these are some of the expressions of the Jockeys who unfortunately, did not end up in The Winners Circle. You might recall this gentleman from a previous post. These athletes are often called to race several times during the day and must reflect upon the race just run, refocus on the task ahead, visualize their strategy and then execute. 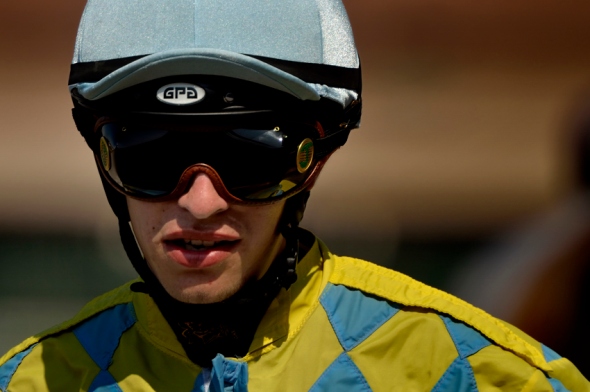 Jockeys must have a light body in order to ride at the weights which are assigned to their mounts. There is no limit on how tall a jockey can be; however, due to weight considerations, most are under five feet, six inches tall. There are horse carrying weight limits, which set by the racing authorities. The Kentucky Derby, for example, has a weight limit of 126 pounds including the jockey’s equipment. The average weight for a jockey is around 115 pounds. Despite their light weight, they must be able to control a horse that is moving at 40 mph and weighs 1,200 pounds.

The colours worn by jockeys in races are the registered “colours” of the owner or trainer who employs them. The practice of horsemen wearing colours probably stems from medieval times when jousts were held between knights. But the origins of racing colours of multifarious patterns that are seen today may have been influenced by racing held in Italian city communities since medieval times. Such traditional events are still held on town streets and are remarkable for furious riding and the colourful spectacle they offer.

Horse racing is a sport where jockeys may incur permanent, debilitating, and even life-threatening injuries. Chief among them include concussion, bone fractures, arthritis, trampling, and paralysis. Jockey insurance premiums remain among the highest of all professional sports.

This entry was posted on August 6, 2011 by Kerstenbeck Photographic Art. It was filed under Domestic Locations and was tagged with California, Del Mar, San Diego.