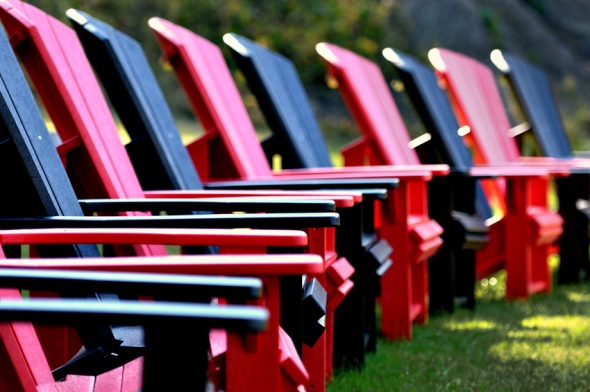 As we drove around Central Ontario searching for the ultimate Fall Colours, we followed a winding road in and around Gravenhurst Ontario which lead us to a series of rental cottages. While hesitant to enter the area, it became clear that during the working week there was no one home. This line of chairs lined the sandy beach waiting for folks to return for, perhaps,  one last weekend before this area of Canada is engulfed by snow! These chairs can be spotted everywhere and come in a rainbow of colours. A new trend I suppose?

Someone once quipped that Canada has 8 months of Winter and 4 months of Bad Skiing! …nothing could be further from the truth – there is something to be said about Four Seasons!

Gravenhurst is a town in the Muskoka Region of Ontario, Canada. It is located approximately 15 kilometres south of Bracebridge, Ontario. The Town of Gravenhurst includes a large area of the District of Muskoka, known to Ontarians as “Cottage Country.” The town centre borders on two lakes: Lake Muskoka, which is the largest lake in the Region, and Gull Lake, a smaller cottage-bordered lake. Another lake, Kahshe Lake, is situated 10 kilometres  south of the town.

Gravenhurst was originally named McCabes Bay and later as Sawdust City. Gravenhurst was named after a village in England which is mentioned in Washington Irving’s Bracebridge Hall.

Gravenhurst’s economic prosperity stemmed from the construction of a colonization road in the 1850s. Steamboating on the Muskoka lakes began in the 1860s. The town is located strategically at the northern terminus of the Toronto, Simcoe and Muskoka Junction Railway. The town is positioned as the “Gateway to Muskoka”.

Nearby Muldrew Lake was named after the lake’s second cottager, Dr. William Hawthorne Muldrew. He was the principal of the first Gravenhurst high school in 1894. In 1901 he published a book called Sylvan Ontario, A Guide to Our Native Trees and Shrubs. It was the first book published on this subject in Ontario, and the drawings were his own. All the different types of trees and shrubs of Muskoka could be seen at the school, as he transplanted many of the specimens from Muldrew Lake.

From 1940 to 1943 Gravenhurst was site of “Little Norway,” an important training camp for what is today the Royal Norwegian Airforce during World War II. From 1940 to 1946 Gravenhurst was the site of Camp XX, the Gravenhurst Internment Camp, for Nazi Prisoners of War, known locally as “The Muskoka Officers Club”. Before the war it was the Calydor Sanitarium. After the war it was turned into a TB sanitarium, again, and later became a Kosher resort called The Gateway.

This entry was posted on October 5, 2011 by Kerstenbeck Photographic Art. It was filed under International Locations and was tagged with Canada.