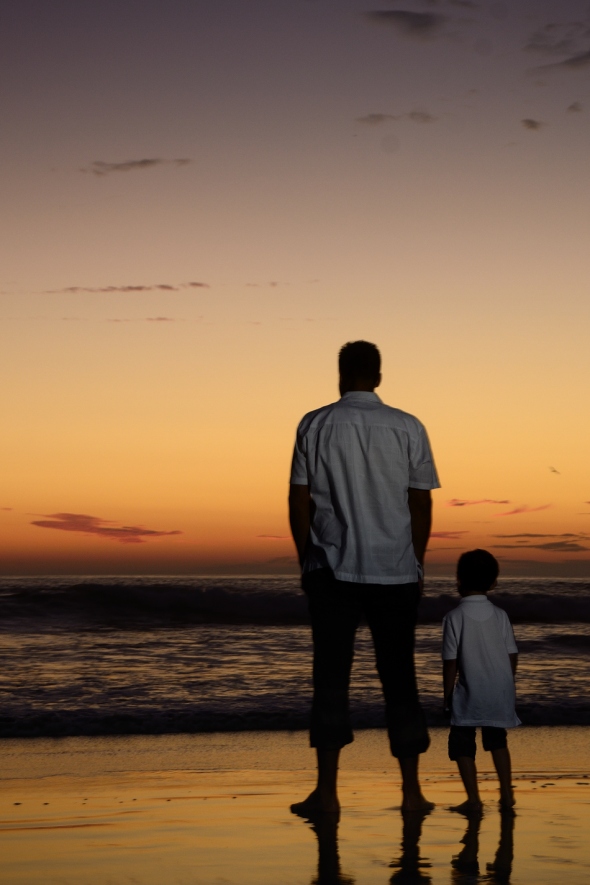 This was shot on the beach at Cardiff in Southern California just as the evening family photo shoot was drawing to a close. The father and Son wandered off into the surf to take in the beautiful sky after sunset. We snuck up behind them and used an off camera flash (Vivitar 285HV with a shoot through umbrella) to provide a bit of fill light without destroying the colors in the sky).

You may recall, “Father and Son” is a popular song written and performed by singer-songwriter, Yusuf Islam (then known as Cat Stevens) on his 1970 album Tea for the Tillerman.

The song frames an exchange between a father not understanding a son’s desire to break away and shape a new life, and the son who cannot really explain himself but knows that it is time for him to seek his own destiny. To echo this, Stevens sings in a deeper register for the father’s lines, while using a higher, more emotive one for those of the son. Here is a snippet of the lyrics!

Father
It’s not time to make a change,
Just relax, take it easy.
You’re still young, that’s your fault,
There’s so much you have to know.
Find a girl, settle down,
If you want you can marry.
Look at me, I am old, but I’m happy.

I was once like you are now, and I know that it’s not easy,
To be calm when you’ve found something going on.
But take your time, think a lot,
Why, think of everything you’ve got.
For you will still be here tomorrow, but your dreams may not.

Son
How can I try to explain, when I do he turns away again.
It’s always been the same, same old story.
From the moment I could talk I was ordered to listen.
Now there’s a way and I know that I have to go away.
I know I have to go.

This entry was posted on November 2, 2011 by Kerstenbeck Photographic Art. It was filed under Domestic Locations and was tagged with San Diego, Sunset.