Although no sculptured marble should rise to their memory, nor engraved stone bear record of their deeds, yet will their remembrance be as lasting as the land they honored.  ~Daniel Webster

These heroes are dead.  They died for liberty – they died for us.  They are at rest.  They sleep in the land they made free, under the flag they rendered stainless, under the solemn pines, the sad hemlocks, the tearful willows, and the embracing vines.  They sleep beneath the shadows of the clouds, careless alike of sunshine or of storm, each in the windowless Place of Rest.  Earth may run red with other wars – they are at peace.  In the midst of battle, in the roar of conflict, they found the serenity of death.  I have one sentiment for soldiers living and dead:  cheers for the living; tears for the dead.  ~Robert G. Ingersoll 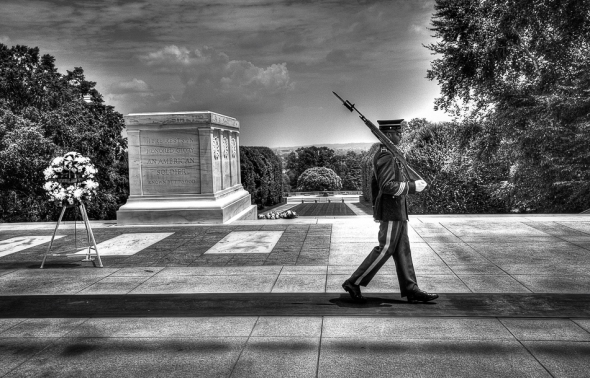 For love of country they accepted death… ~James A. Garfield

Many people observe Memorial Day by visiting cemeteries and memorials. A national moment of remembrance takes place at 3 pm local time. Another tradition is to fly the flag of the United States at half-staff from dawn until noon local time. Volunteers often place American flags on each grave site at national cemeteries. For many Americans, the central event is attending one of the thousands of parades held on Memorial Day in large and small cities all over the country. Most of these feature marching bands and an overall military theme with the National Guard and other servicemen participating along with veterans and military vehicles from various wars.

This image is from The Tomb of the Unknown Soldier, in Washington DC. The vigil is held 24 hours/day, 365 days/year…….. Lest we Forget.

Tomb of the Unknowns 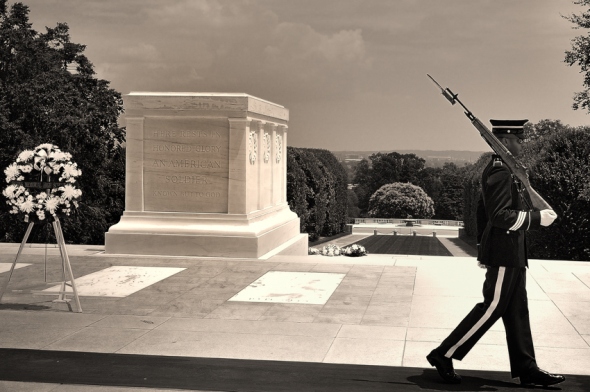 For Memorial Day and Every Day

This was shot in Washington DC at the Tomb of the Unknowns in Arlington National cemetary in Washington DC.. This tomb is guarded 24 hours a day. It was uncanny how the guard made virtually no sound as he made his rounds. It seemed as if he were floating on air!

The Tomb of the Unknowns (also known as the Tomb of the Unknown Soldier, although it has never been officially named) is a monument dedicated to American service members who have died without their remains being identified.  The World War I “Unknown” is a recipient of the Medal of Honor, the Victoria Cross, and several other foreign nations’ highest service awards. The U.S. Unknowns who were interred afterwards are also recipients of the Medal of Honor, presented by the U.S. presidents who presided over their funerals.

The white marble sarcophagus has a flat-faced form and is relieved at the corners and along the sides by neo-classical pilasters set into the surface. The stone was quarried in Marble, Colorado from the Yule Marble Quarry. The tomb was then fabricated by craftsmen in Proctor, Vermont before it was shipped by train to Washington, DC. The final carving was executed by Thomas Hudson Jones in Virginia.Sculpted into the east panel that faces Washington DC, are three Greek figures representing Peace, Victory, and Valor. Inscribed on the western panel of the Tomb are the words: 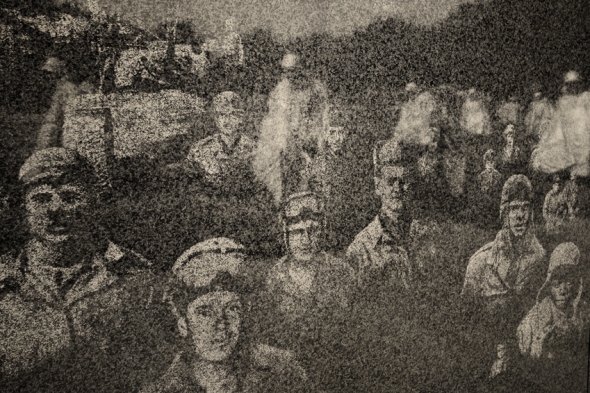 This was shot in Washington DC – notice the reflections of the Korean War statues on the face of this granite monument, a tribute to all who have served, God Bless and Thank You!

Memorial Day is observed on the last Monday of May (May 30 in 2011). Formerly known as Decoration Day, it commemorates U.S. soldiers who died while in the military service. First enacted by former enslaved Africans to honor Union soldiers of the American Civil War – it was extended after World War 1 to honor Americans who have died in all wars.

Memorial Day often marks the start of the summer vacation season, and Labor Day its end.

Begun as a ritual of remembrance and reconciliation after the Civil War, by the early 20th century, Memorial Day was an occasion for more general expressions of memory, as ordinary people visited the graves of their deceased relatives, whether they had served in the military or not. It also became a long weekend increasingly devoted to shopping, family get-togethers, fireworks, trips to the beach, and national media events such as the Indianapolis 500 auto race, held since 1911 on the Sunday of Memorial Day weekend. www.kerstenbeck.com

Ask Not, In Memory of JFK 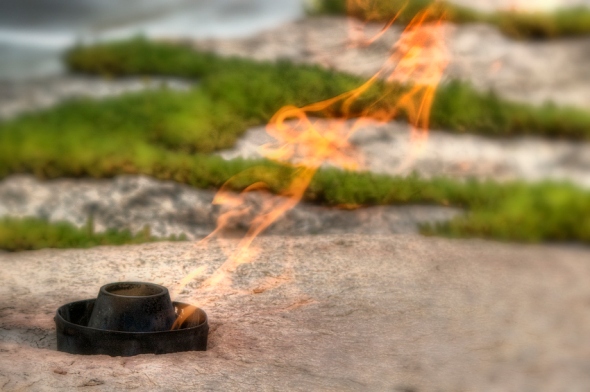 In the long history of the world, only a few generations have been granted the role of defending freedom in its hour of maximum danger. I do not shank from this responsibility – I welcome it. I do not believe that any of us would exchange places with any other people or any other generation. The energy, the faith, the devotion which we bring to this endeavour will light our country and all who serve it — and the glow from that fire can truly light the world.

My fellow citizens of the world: ask not what America will do for you, but what together we can do for the freedom of man.